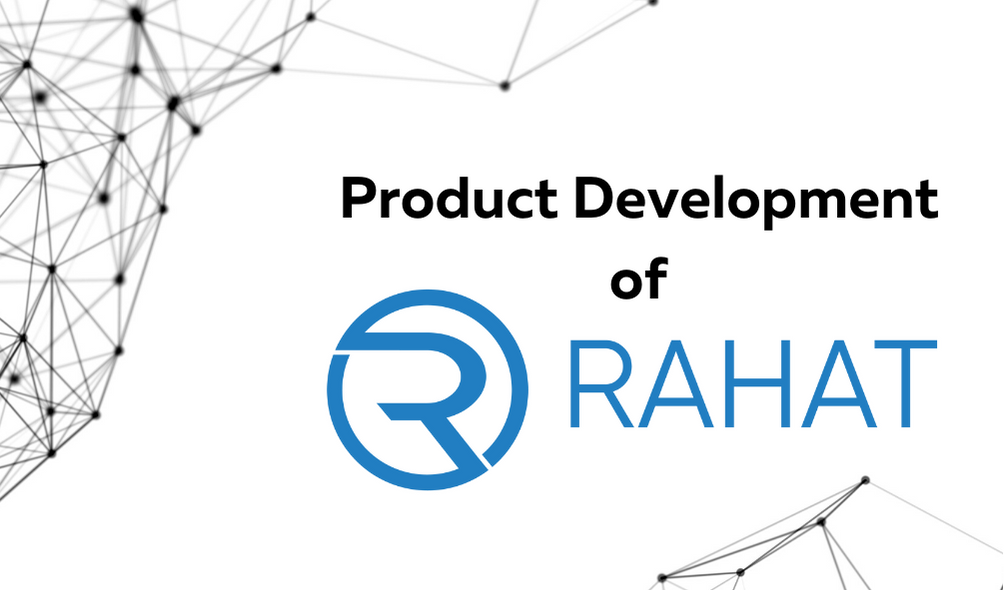 Nepal is particularly prone to natural hazards including earthquakes, landslides, and floods. These situations are intensified with a significant population living in extreme poverty. Distributing aid quickly after the occurrence of a disaster can significantly reduce the impact but in the context of Nepal, aid distribution is more severe and slow. There are flaws in the system such as slow delivery and mismanagement during distribution.

Hence, with the purpose of making the distribution of humanitarian aid as simple, transparent and efficient as possible, the Rahat system has been created.

This blog will walk you through the stages of Rahat design creation as well as the problems we encountered during the design process. Here, we focused specifically on what things we work on in terms of design? Along with that  we'll also discuss how we worked through the entire process to understand users' behavior and their experience with our app.

But before Rahats’ Product development process. Let’s know about What Rahat is? and  its features;

Rahat is an open source blockchain-based token cash and voucher assistance platform.The current relief distribution system is opaque, slow and expensive. This in turn creates potential for aid mismanagement, waste and fraud. Powered by blockchain, Rahat ensures transparency and real time monitoring of relief distribution. When disaster strikes, getting aid to the affected is the priority. With the elimination of physical cash and vouchers in the aid process, Rahat hopes to plug leakages in Cash Voucher Assistant (CVA) and make sure that help reaches the intended people on time. Rahat has recently received a UNICEF Innovation Fund.  As part of the UNICEF Innovation Fund’s portfolio, we have  joined a community of problem solvers developing open source solutions further with frontier technology like blockchain.

There are different stages of the product development process of Rahat System.

The assumptions were made while developing the Rahat System;

Before developing the Rahat system, extensive research was undertaken into the process, layout, POC system, and use cases of blockchain technology in relief distribution that could be used to develop a system adapted to the Nepali market's needs and requirements. We also learned about the Cash Voucher Assistant (CVA) and focused on analyzing other companies involved in the aid distribution process in Nepal and around the world. The business team gathered the requirements that needed to be included while building a Rahat system and sent it over to the technical team for Rahat system design.

Before, we jump into the wireframe and its overall development process. Let’s first know about the technology stack used in the Rahat System. 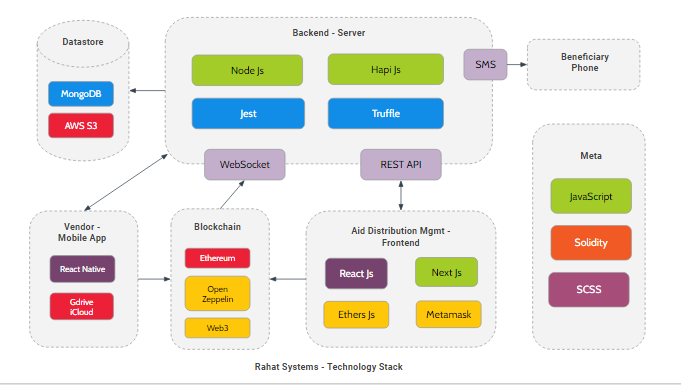 Talking about the technology stack used in the Rahat System, the team has built it on an Ethereum Virtual Machine (EVM) based blockchain to handle all the transactions in relief distribution. Likewise, Web apps use node.js, hapi.js react and mongodb. Along with that a separate web based wallet is also being developed named Rumsan Wallet. We have used tools like sprint meetings, Miro etc.

The Rahat platform has five actors who use the Rahat platform for the aid distribution process. Each actor has a specific role to play in Rahat and also a separate app to use for each actor to carry out its task.

Rahat Agency Application is used by different actors of the Rahat system. It is developed by using the technologies such as MongoDB database, HTML/CSS/Javascript with react library UI and programming language, NodeJS server, and Blockchain/Ethereum. The Rahat system consists of four major applications which are interconnected to each other.

Rumsan digital wallet, a digital signature base (password-less unique digital signature/identifier) is used to log into the Rahat app, the aid agency employs it. They need to open the agency app login page and then scan the QR code and finally get on board in the online agency dashboard.  Once the aid agency is logged in through Rumsan wallet, they can perform all the blockchain-based transactions.

The Agency app is the one that is used by the two main actors i.e. the Admin and the Project Manager. They approve the requests from the different actors such as the vendors, beneficiaries, and social mobilizers. They store and keep track of all the activities related to the aid distribution process and also the detailed information related to the user of the app.

Vendor app is used by the vendor who provides the aid/Rahat to the beneficiaries after receiving the OTP from them. By using this app the vendor obtains the OTP and collects the tokens from the aid agency and then redeems the tokens and then receives the amount equivalent to the tokens.

The most crucial part of any project after it has been developed is to test its usefulness among the actors/users of the system. The COVID-19 pandemic has made us realize that giving aid in such scenarios is one of the most challenging tasks. COVID was the ideal opportunity for us to put the Rahat system to the test in terms of relief distribution projects. So, considering the situations the four pilots of Rahat have been carried out during the time of pandemic. We've completed a total of 11 pilots so far.

During the development process, the Rahat team also introduces a new feature in the system i.e. the social mobilizer app as one of the system's new features in the later pilots.

Since all of the beneficiaries were unknown prior to the pilot, it was impossible to provide aid to the onsite beneficiaries, thus the new feature, the social mobilizer app, was created to address this issue. We are currently creating Rahat as an open source platform to create an impact in the process to build and embrace open source culture. The feedback from the users, testing , pre-testing, technology adoption, implementation driven test were also taken into consideration while implementing the system in every pilot that we carried out.

There were various challenges faced in terms of design and the pilot. First and foremost, while carrying out the pilot projects, it was difficult to deliver aid to the onsite beneficiaries because all of the beneficiaries were unknown before to the pilot, thus the new feature, the social mobilizer app, was designed to address this issue. The social mobilizer app has been introduced to identify and distribute tokens to onsite beneficiaries. Similarly, there was also a difficulty for vendors in the registration process due to language (English) used in the app. The Rahat team also focused on simplifying the web applications UX  while implementing wallets.

The pandemic has caused huge problems for the poor, vulnerable, and socially excluded, especially the landless populations and daily wage earners. In such hazardous situations, there are several reports of aid distribution corruption and fraud, as well as high overhead costs. So, with the use of blockchain technology, the Rahat team is creating a platform for the aid agencies by making the entire process more secure, hassle-free  to distribute the aid to the beneficiaries. By keeping the real time track of all the activities carried out ,agencies can ensure transparency. Now, the affected ones will not have to wait days  to receive a bag of rice.